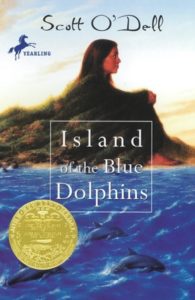 Island of Blue Dolphins by Scott O’Dell
Karana, an Indian girl, lives happily with her people on the Island of the Blue Dolphins. It is an island in the Pacific that gets its name from its beautiful shape from above it looks like a dolphin lying on its side, “with its tail pointing toward sunrise,” sunning itself in the sea. Around it blue dolphins swim, otters play, and sea elephants and sea birds thrive. Karana’s people live in harmony among the other animals on and around the island as they have for generations. Her father is the chief of the village. And then one day a boat comes captained by a Russian man, who “looked at the little harbor as though it already belonged to him.” The captain and his crew wish to hunt sea otter on their own terms. Their disregard for the ways of the Indians leads to bloody consequences, and Karana’s family is destroyed, and eventually with the arrival of more white men, the entire community disappears from the island, save Karana. For years she lives on the island alone, using the skills of her people to survive. For the first time, she modifies the skills only the men of her village had mastered. She makes a fence from the ribs of a whale. She builds a house. Eventually she becomes comfortable alone. She befriends one of the wild dogs, and the blue dolphins still give her strength. But she will not be alone for much longer. This books is based on an incredible true story! 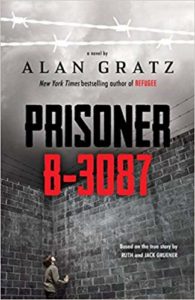 Prisoner B-3087 by Alan Gratz
Ten concentration camps. Ten different places where you are starved, tortured, & worked mercilessly. It’s something no one could imagine surviving. But it is what Yanek Gruener has to face. As a Jewish boy in 1930s Poland, Yanek is at the mercy of the Nazis who have taken over. Everything he has & everyone he loves has been snatched brutally from him. Then Yanek himself is taken prisoner–his arm marked B-3087. He is forced from one nightmarish concentration camp to another, as World War II rages all around him. He encounters evil he never could have imagined, but also sees surprising glimpses of hope among the horror. Can Yanek make it through without losing his will to live–and most of all, his sense of who he really is inside? This books is based on an astonishing true story!